Vaccine Injuries Ratio: One for Every 39 Vaccines Administered

The “Children’s Health Defense” organization, and website  https://childrenshealthdefense.org/ present the following information to support the title claim of serious frequencies of vaccine damage and unfounded contrary claims by the medical industry. 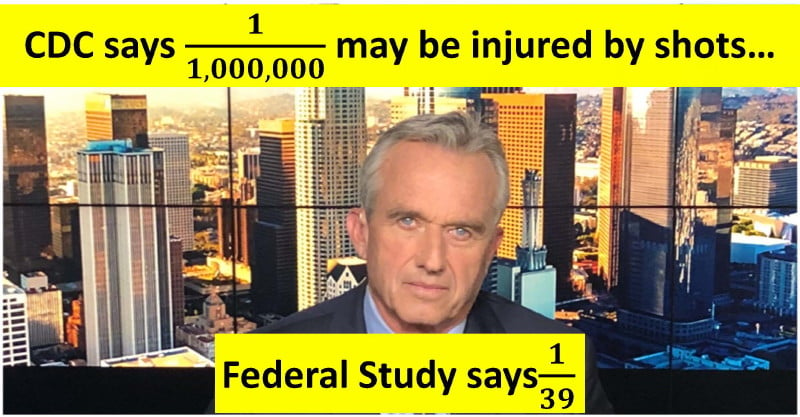 During our September 18 debate, Spectrum TV host Renee Eng asked Kaiser’s, Dr. Robert Riewerts, how many vaccine injuries he had seen during his 30 years as a Pediatrician. His answer: “None, not a single one.”

Slide 1 shows a 2010 U.S. Health and Human Services (HHS) pilot study by the Federal Agency for Health Care Research (AHCR) to test the efficiency of a state-of-the-art machine counting (AI) system on data records from the Harvard Pilgrim HMO. Those government researchers found that 2.6% of vaccination resulted in injuries—a ratio one for every 39 vaccines administered. The same study found that typical clinicians see 1.3 vaccine injuries per month.

Slide 2. A table from HHS’s 2016 Neiss-Cades survey published in JAMA

Slide 2 is a table from HHS’s 2016 Neiss-Cades survey published in JAMA reporting an astonishing 19.5% of children under five who are admitted to emergency rooms for drug reactions are suffering vaccine injuries. This finding certainly represents an undercount since pediatric hospitals, which treat most serious injuries, were badly underrepresented in the database, (Only six of 63 hospitals surveyed).

How is it then that Dr. Riewerts has given thousands of vaccines and never seen an injury?

Medical schools—largely funded by Pharma, do not teach doctors to recognize vaccine injuries, and indoctrinate pediatricians to believe such injuries don’t exist. CDC tells doctors that vaccine injury is vanishingly rare. Therefore, Pediatricians like Dr. Riewerts whose patients suffer vaccine injury like seizures, epilepsy, allergies, autoimmune and neurological injuries, or SIDS, are likely to dismiss those incidents as “sad coincidences” unrelated to vaccines and never report them to VAERS.

Slide 3. AHCR confirmed these assessments, finding that “fewer than 1% of vaccine injuries were reported.

Slide 4 shows that CDC officially were so panicked by AHRC’s revelations that they killed the AI system-wide roll-out and stopped returning phone calls from their sister agency. Today, CDC purposefully continues to use a surveillance system designed to under-count vaccine injuries by over 99%!

There is more than enough evidence to support the truth of this claim.
Claims of “false news” can easily be ignored, even easily disputed.
There is plenty of “false news” about but reading this will help readers better discern which sources are reliable, and which sources have such enormous power to brainwash the public.

Retired Electronics Engineer, most recently installing and maintaining medical X-Ray equipment. A mature age "student" of Life and Nature, an advocate of Truth, Justice and Humanity, promoting awareness of the injustices in the world.
View all posts by Ken McMurtrie →
This entry was posted in HEALTH, Vaccination Dangers, vaccines and tagged CDC, Ethics, Public health. Bookmark the permalink.

5 Responses to Vaccine Injuries Ratio: One for Every 39 Vaccines Administered