Thoughts relating to the much promoted and strongly supported “Climate Change” ‘danger to civilization’ movement: 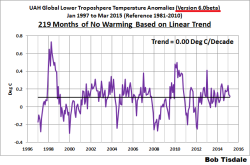 It is entirely logical to consider this global attack on our well-being as an aberration of scientific principles and political agenda.

A few of the vast number of relevant articles to give cause to think about what it all really means:

“Right. A path toward less plant fertilizing carbon dioxide, to prevent “unprecedented disasters” that aren’t happening (except in SimPlanet computer models), by stabilizing a perpetually changing climate that is driven by powerful natural forces over which humans have no control – under a 2015 Paris treaty that will inflict global governance by unelected activists and bureaucrats, bring lower living standards to billions, and initiate wealth redistribution of at least $100 billion a year to ruling elites in poor countries.”

“Unfortunately for the global warming alarmists who are completely immune to logic and reason or any natural laws of science, the atmosphere, sunlight or any other laws of nature that interferes with their personal tyrannical global government agenda, not everyone is indulging in this heavily funded blind climate change lunacy dogma that is seemingly sweeping the globe leading up the U.N. conference in Paris.”

All these questions remain without official, scientifically based answers. The integrity of the science currently supporting drastic carbon controls, and financial and political upheavals being forced onto our population, is justifiably being questioned and must be addressed if we are to have justice in this world.