Another Jo Nova post. Surely an admission by the Australian BOM of having cheated?

A team of independent auditors, bloggers and scientists went through the the BOM “High Quality” (HQ) dataset and found significant errors, omissions and inexplicable adjustments. The team and Senator Cory Bernardi put in a Parliamentary request to get our Australian National Audit Office to reassess the BOM records. In response, the BOM, clearly afraid of getting audited, and still not providing all the data, code and explanations that were needed, decided to toss out the old so called High Quality (HQ) record, and start again. The old HQ increased the trends by 40% nationally, and 70% in the cities.

So goodbye “HQ”, hello “ACORN”. End result? Much the same.

That meant the ANAO could avoid an audit, since the BOM had changed data-sets, the point of auditing the old set was moot.

For me, this version is so much worse than the previous one. In the HQ data set the errors could have been inadvertent, but now we’ve pointed out the flaws, there can be no excuses for getting it wrong. Instead of fixing the flaws (and thanking the volunteers), it’s almost as if they’ve gone out of their way to not solve them. Instead it’s been complexified, rushed, has many typo’s and gaps, and the point (see below) about the “adjustments having no impact” — when they obviously do — begs to be audited by the Auditor General, the ACCC, Four Corners (ha ha) and 60 Minutes.

To make it all look o-so-convincing, the BOM asked three experts (from NOAA, NZ, and Canada) to look over it all, and score the BOM against its peers. But the peers standards are not too high in the first place: NOAA was caught with 89% of it’s own thermometers in the wrong spots near air conditioners and whatnot, and NZ’s records were so bad, they disowned them themselves. (NZ adjustimongered their temperature trends from 0.06C right up to 0.9C, got caught, and their response under legal pressure was to say but it’s ok, “There is no “official” or formal New Zealand Temperature Record”.)

How useful is it when a team of substandard institutions is asked  to evaluate whether the BOM practices are “amongst international best practice” when it is international best practice to ignore concrete, car-parks, tarmac, and lose the data too? We aren’t impressed if the BOM is as bad as the rest of the world, we want open data, transparent methods, and reproducible results. We want high quality to mean, well, high… quality.

Because it covers a vast area, Alice Springs contributes 7-10% of the national signal.

ACORN and the BOM claim that since the new results are pretty much the same, really they give more confidence than ever that Australia has warmed since 1960.

Ken Stewart and the independent BOM analysts team have sliced and diced through the ACORN data.
They conclude:

Too tricky by half? The BOM tries to hide the effect of adjustments

Here’s a piece of sleight of hand — ACORN, they claim, has a random set of a adjustments of both up and down (which is what we’d expect).

The official CAWCR Technical Report No. 04:

But the independent auditors point the positive adjustments are larger than the negative:

While there may be a numeric balance of positive and negative adjustments, analysis of a representative sample indicates that adjustments predominantly increase warming.

This is for me the most sinister point. Recall that Dr David Jones, Head of Climate Monitoring and Prediction, National Climate Centre, Bureau of Meteorology, stated clearly that the adjustments made “a near zero impact on the all Australian temperature”.  Knowing that critics were drawing attention to that statement and pointing out it was not so, the BOM apparently paid attention themselves to this matter. That’s fair enough, perhaps it was an honest oversight.  But having been notified of the bias, they then went on to create a situation where they can state a half-truth which makes it appear his statement is true, while in reality is it still not. Is it just incompetence, or something worse? Did they not check the overall effect of their adjustments? Did they think that no one else would do that?

Ken Stewart points out that in the  CAWCR Technical Report No. 049 by Blair Trewin, it appears that the BOM are using a new technique to homogenize and “correct” the data which involves comparing the data to the 40 nearest neighbors. But the stations are still very far apart. As many as 20% of them are more than 100km away from their closest neighbor. Just how far apart are some stations which are being compared?

It’s an international standard that temperature stations should not be more than 100km apart.

Acorn’s lead author Blair Trewin admits this in a technical paper, saying “Even today, 23 of the 112 ACORN-SAT locations are 100 kilometres or more from their nearest neighbour, and this number has been greater at times in the past, especially prior to 1950.” 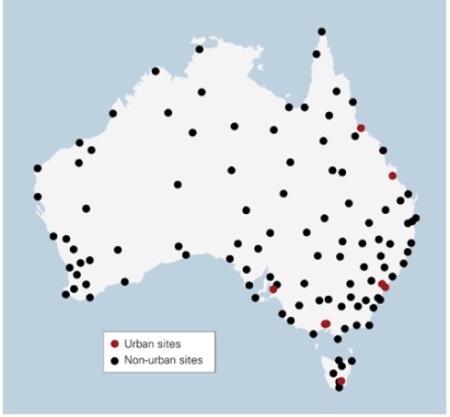 The mystery of Alice Springs

In the Alice Springs graph (shown at the top) Ken notes that it is an important record because it covers a vast area. Yet it’s very adjusted using the “40 nearest stations”, and there are no sites close to it.

What neighbouring stations were used to make adjustments before the 1950s?  There are no sites with overlapping digitised data within cooee of Alice Springs.  Oodnadatta and Tennant Creek are about 460km away; there are only very few sites for periods after this.  Yet Alice Springs contributes 7-10% of the national warming signal.  How much do Giles, Tennant Creek, Birdsville, and Horn Island contribute?

See for your own eyes the before and after versions of Australian temperature data:

Brisbane’s long records that show hardly any warming are ignored

There is a long record from the regional office in Brisbane, but the BOM does not even mention it. Instead they chose the shorter Eagle Farm Airport that starts in 1948 and shows a warming trend.

On the Brisbane maxima record Ken shows that there was no attempt to splice the move from the old airport to the new airport — ACORN simply cuts straight to the new record on the day it starts and ignores the continuous data from the old airport. This is sloppy and suggests ACORN was a rushed, half-baked effort with little attempt to ensure the data was accurate and high quality.

Rutherglen:  cold mornings 100 years ago were just discovered to be a whole lot colder. Really?

In Rutherglen in Northern Victoria, the maxima trend was slightly cooled, but the minima was warmed so much that the overall trend increased. Again there are large unexplained corrections as well. For example, on October 13 1926 apparently the thermometer record of 6.9C was really meant to be -1.2C. What were those 1920′s thermometers doing?

Between 1920 and 1948 large slabs of ACORN data were also shifted by one day — a sloppy move that suggests the data was not cross checked, and staff were in a hurry. Even the most basic tests of reliability and accuracy ought to have turned up mistakes like that.  Where is the quality control?

The record minima were also changed. Thermometers tells us the coldest day was quite recent:  a chilly -7.5C in June 2006. But ACORN concludes that the coldest day was in 1913 (-7.9C). Are they rewriting history, or was there an artificial warming effect in the early mornings of WWI-era Rutherglen that affected thermometers and that they have only just discovered?

Since “hottest” and “coldest” records often score media attention, it is significant that these official statistics are now quite different from what would have been recorded at the time.

Where are the explanations for these adjustments? Surely the BOM team wrote them down and discussed them, why don’t they just release their notes?

Australians are paying the BOM to give them an accurate unbiased analysis of the climate, yet volunteers repeatedly find errors that show the reports are sloppy, and inexplicable adjustments which increase the trend, while the BOM continues to claim the adjustments have zero effect, and the data is “high quality”. These trends are part of the information used to justify taxes that divert around $10 billion per year from Australian workers to projects that have little or no value if indeed the Australian climate is not warming as fast as is claimed, and if the models which project catastrophe, are “tuned” with exaggerated trends to begin with. Our climate records are not independently audited or assessed by any professional group, as financial data of this importance would be. If the BOM is so “confident” of their work, why are they so reluctant to explain it, or encourage it to be independently checked?

Furthermore, other scientists all around the world rely on this data. Groups like climate modelers, and those trying to reconstruct the past (eg. Gergis et al) use BOM official data to calibrate models or other temperature proxies, meaning that if the BOM data overstates the trends, other scientific conclusions will likewise overstate the trends. It’s a cascade of errors and it starts at the BOM.

We are asked to believe that climate models today can accurately predict the future, but that in the first half of the 20th Century simple equipment like thermometers systematically overstated temperatures, and that those errors were only just “discovered” recently.  Scientists have been using thermometers for 300 years, yet the flaws in most Australian historical thermometers apparently cannot be explained even to people with qualifications in engineering, statistics and maths. Furthermore, historic thermometers are well known to be placed in sites that now are surrounded by concrete, bitumen, and sometimes have electronic heat pumps warming the locale as well (in the form of air conditioners). In some places, tens of thousands of internal combustion engines pass by daily. When common sense suggests that modern thermometers are more likely to have artificial warming sources close by and ought to be adjusted down to compare with historic ones, the BOM adjusts the older historic and better placed thermometers downwards instead.

You don’t need to have a PhD to know Australians deserve better.

Thanks to the Independent BOM Auditors who, unpaid, have spent the hours to go through the data in detail, writing algorithms and code to check the data and trawling through massive amounts of information with little help from the officials who are paid to serve the public.

UPDATE #1: The sloppiness of observers who couldn’t be bothered with decimal places…

As with the previous HQ network, many observers didn’t bother to record temperatures in fractions of a degree. Around 30% of all readings in the Fahrenheit era (before 1972) were whole numbers, and about 18% afterwards. (It should have been 10% if the observers were following the rule book). This effect shows us that the measurements were much more slap dash than the BOM would like us to believe, and the issue may introduce a spurious warming trend — it’s not obvious, because we could assume that accurate rounding doesn’t have a strong effect, but we don’t know how many of the observers flatly truncated the number. Since the whole number sloppiness was more common with minima, rather than maxima, and cold mornings being what they are, it’s possible that the effect of truncating readings could have made earlier records cooler than current ones, since earlier records had more whole numbers. See WAClimate for all the details, indeed, check it out just to get an idea of the level of detail the volunteers went too. There are some 6.5 million temperature recordings to go through.